My friend Harsha de Silva, one of the handful of uncorrupt politicians in the country, has become the undisputed economic spokesperson for the entire opposition. A few days ago, he proposed a specific roadmap for economic recovery. He said, according to the FT, that the opposition has taken a bold step to provide the government with its own plan titled “Out of the debt trap and towards sustainable inclusive development”. The document presented to parliament by de Silva on Friday consisted of a 10-point common minimum program for Sri Lanka’s economic recovery.

De Silva, going even further, said it has been months since Wickremesinghe became prime minister and now president, and while the main opposition agrees with his general plan for Sri Lanka’s economic recovery, no details are available. was later clarified. The SJB MP expressed concern over the delay, noting that Sri Lanka had no time to waste and people were losing faith that there was no plan. While what Harsha is saying makes a lot of sense, the situation on the ground requires far more concrete decisions and actions than just visionary statements.

For example, we all know that the economy needs an injection of around $1 billion to get through the next three months. How to collect this money? Can the banks or the government do this? Have the bilaterals or multilaterals reached an agreement with the government? What are our options in the absence of an agreement? Banks are accused of fueling GOSL’s borrowing spree on commercial terms in the past. The prudent option is therefore to reduce the economy to a level where we can manage our foreign exchange demands or to consider other short-term options to raise funds using new instruments.

There are excellent examples in Romania and Greece. I suggested several short-term options in a recent FT article to boost our currency flows. Business tycoon Dhammika Perera suggested several practical short-term options. Obviously he knows what he’s talking about. His business made 20 billion profit in one quarter (ft.lk Hayleys makes record profit of Rs. 20 billion before tax in Q1: https://www.ft.lk/front-page/Hayleys-achieves-record -breaking -Rs-20-b-earnings-before-tax-at-1Q/44-738734).

The other big item is debt restructuring. Harsha says Sri Lanka needs to engage with its creditors and restructure its debt as a matter of urgency, and for that the country needs to demonstrate its willingness to achieve debt sustainability through a reform system. We all know that has to be the top priority of the country. The Ministry of Finance, according to the Daily FT of 08/17, says: “Engaging with the International Monetary Fund to secure a programme, hiring financial and legal advisers, initiating the design of an economic reform programme, engaging with bilateral creditors, and in particular to secure emergency liquidity credit lines were among the measures taken by the government. Furthermore, they stated: “According to the debt sustainability analysis conducted by the IMF, Sri Lanka’s public debt has reached unsustainable levels, amounting to 114% of GDP at the end of 2021, of which 47 % were denominated in foreign currencies.

President Ranil Wickremesinghe said recently: “Debt advisors in Sri Lanka are currently looking at local debt, such as a restructuring plan to be negotiated with our creditors, this is being worked out as part of efforts to make the debt viable in order to obtain IMF support. The latter specifically told us to also present a proposal for sustainable debt restructuring through negotiations with China.

Local debt haircuts should face the resulting increase in bank capital through capital injections, if possible from FDI or local investments with better banking prudential behavior and guidance strong and competent directors, regardless of the persuasion of the GOSL on the factors of fixed income investments which they consider to be the “radix”. causa” of the LKR liquidity crisis which benefited themselves and not the nation and fueled the USD liquidity crisis, and its devastating results on bank balance sheets. The impact on insurance companies, asset managers, large corporations and wealthy households could also be directly affected. Indeed, non-banks hold about half of the domestic debt stock. The repercussions could be serious and should be taken into account in any cost-benefit analysis exercise by decision makers.

The Governor of the Central Bank, however, ruled out any discount on the restructuring of domestic debt. Let’s hope he can convince the private creditors ($20 billion) to accept his terms. The unforeseen defect also put pressure on the process. There are several other options that should be explored. The mere possibility of such a course of action underscores the very difficult situation the country finds itself in after years of economic mismanagement and months of political paralysis. The challenges are therefore colossal and cannot be resolved with the stroke of a pen or a press conference. What is more important is to first sanction and then prosecute all government officials, politicians and advisers who are responsible for the halving of Sri Lanka’s net worth and force it into default. 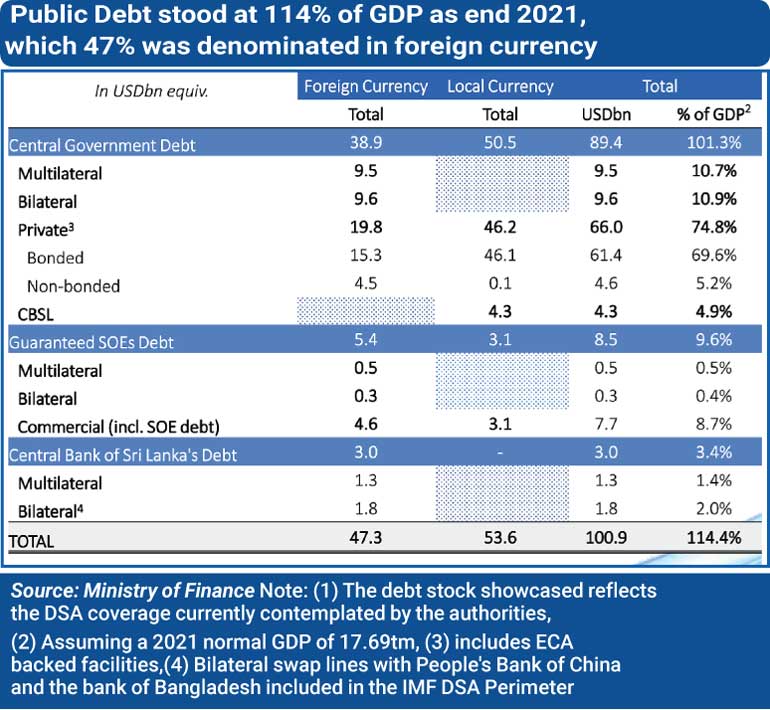 From the fifth high-level seminar in Oslo. Photo: PRIO / Taral Jansen This week, PRIO is organizing the 11th UN High Level Seminar on Gender and Inclusive Mediation Strategies. The seminar is designed for envoys, high-level mediators and other key actors involved in international peacemaking. The overall objective of the seminar is to generate more […]

VISAKHAPATNAM: The ruling YSRC leaders are strategizing to counter the padayatra launched by Amaravati Parirakshana Samithi on Monday. The two-month Yatra program is supported by Telugu Desam, BJP, Jana Sena and CPIM and CPI. Industry and IT Minister Gudivada Amarnath held a meeting with senior party brass in Visakhapatnam on Monday and discussed ways to […]