Steve Sanson, president of Veterans in Politics, begins with the fact that Joe Lombardo twice scheduled to come for an interview with Veterans in Politics, but canceled both times. Lombardo has been dubbed “No Show Joe” by many with a similar demeanor of not showing up at many of the gubernatorial contestants’ debates held across the state of Nevada since January. What is Joe afraid of? Does he think he is above the debates since he has the most money raised and feels like he is on cruise control during the primaries? Tell us, Jo. Nevada wants to know.

Second, the NVGOP at the State Convention on Saturday, April 30, 2022 voted to endorse Joey Gilbert as governor over the Trump-endorsed Joseph Lombardo. That should tell us something. The people of Nevada don’t want the same establishment politician. Nevada voters no longer want RINOs in office. We the people want a candidate who is a REAL conservative – a candidate who will fight to restore our rights and uphold the Constitution. This candidate is Joey Gilbert and certainly not Joseph Lombardo. Joe Lombardo’s campaign has asked his supporters to pay for their ticket to the State Convention so they can be delegates and vote to endorse it. I’m not sure any other candidate paid for delegate votes. 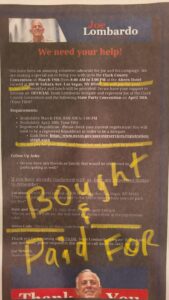 In an interview with a journalist and Lombardo, she asks him if he was a governor would he have closed businesses he quickly answers with a “no”, then the next second he says well hold on, “yes I will”. What is it, Joe? Would you lock down our state and businesses and deem some not essential?

Lombardo also flip-flopped on vaccination mandates. He implemented vaccination mandates for all of his new recruits in 2021, but only just canceled those mandates. Why is that? Simply because mandates are not popular among Republicans and it would hurt the campaign? We believe it’s all for show and he’s doing it all for his campaign’s optics. Joe is not a real conservative.

The Second Amendment was also discussed on the Veterans in Politics show where guest co-host Stephanie L. Phillips read an article written by The Sun in 2016 where Lombardo says “it’s not necessary to have a magazine of big capacity”. Doesn’t sound like a gun rights advocate as he’s trying to run now that he’s running for governor.

Lombardo recently posted an announcement on his Facebook page regarding election integrity and how we must protect our elections. This seems strange because not so long ago he said in an interview that he had seen “no widespread voter fraud” and also “Biden is the duly elected president”. What is it, Joe? Is he posting this now because he got Trump’s approval? We all know how President Trump feels about the 2020 election.

Further information about Joe Lombardo and his family who donated to the Sisolak campaign in 2018 was discussed. How can you call yourself a conservative Republican while supporting a Democrat? Joe donated a maximum of $5,000.00 with his sheriff’s campaign at the time by donating an additional $1,000.00 and more from members of Lombardo’s family. 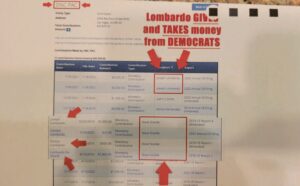 Another big topic of discussion was the Route 91 investigation. Why was it shut down so quickly? The silence was deafening. Nevada would also like to know where the money went from the Go Fund Me account set up for the Route 91 shooting victims. It was reported that $30 million was raised, but not all of it went to the victims. Where did the rest go? Has this account been audited? He probably should have been. If there’s nothing to hide and if none of that money went into Joe’s pocket like he claims, then an audit shouldn’t be denied to the people.

The discussion turned to when BLM was rioting here in Las Vegas and the question was raised about what had been discussed between Lombardo and Governor Sisolak at the time regarding the arrival of the National Guard to protect our streets. Would that have prevented shooting one of Metro’s officers, Shay Mikalonis? We’ll never know. Why was the National Guard not deployed? Was it Lombardo’s recommendation to the governor that they weren’t needed at the time? Nevada wants to know Joe.

The exponential increase in crime in the Las Vegas Valley was also mentioned. The murder rate is up about 49%, property crimes are up, and assaults are up, but Joe says when he’s governor he’ll fix the crime problem.

Well, why not fix it now as Sheriff Joe? You don’t get promoted when you fail in your current job. Lombardo also removed Metro from the ICE program where they would flag inmates who are about to be deported. Among conservative Republicans, the move earned him the nickname “Sanctuary Joe.”

Steve Sanson concludes with “you are stupid if you think that Joseph Lombardo is the best for this State”. A TRUE Conservative would never be in favor of mandates, restrictive gun laws or red flag laws, and never in favor of closing businesses that classify them as non-essential. The truth is that Joseph Lombardo is simply a RINO and not a constitutional conservative like Joey Gilbert. Lombardo is just another Democrat like Steve Sisolak in “Republican gear.”

PHILADELPHIA — Phillies officials are pushing back on recent claims by disgruntled minor leaguers and an advocacy group that the organization has not done all it can to find non-hotel accommodations for players in their hometowns this season. Although the Phillies have admitted that players live in hotels at all levels of the agricultural system, […]

Senate Democratic Leader Laurent Book will enter its first voting contest with the endorsement of the state’s largest LGBTQ civil rights organization. Equality Florida On Wednesday, he announced his support for Book as she seeks her second full term in the Senate. She faces a Democratic primary opponent in former Broward County Commissioner Barbara Sharif. […]

Saturday, the Greater Akron Hindu Sewa Committee went green. At an event at its Akron headquarters on Brittain Road near Chapel Hill, the organization, which helps residents of the thriving Bhutanese and Nepalese community establish a firm foothold in the area, donated seedlings tomatoes, peppers, zucchini and beans to about 50 families. After:Nepalese athlete sets […]